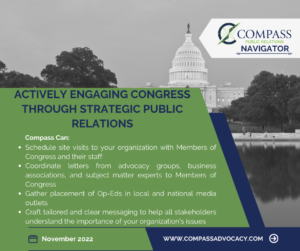 Are you looking to get your message in front of Members of Congress? Compass Public Relations is here to help you advocate your organization’s issues at the right time and to the right people through targeted federal campaigns. We’ll assist in identifying your organization’s priorities to foster engagement with policymakers and their staff, media outlets, and key external audiences.

Here are ways that the Compass PR team can advance your advocacy efforts to shape policy and public opinion: 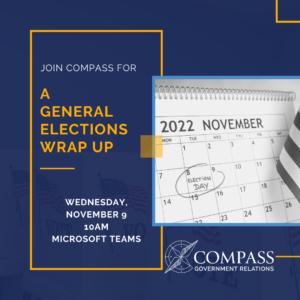 The Maryland General Election this year is a rare opportunity to see the “big four” up for election: Governor, Lieutenant Governor, Comptroller, and Attorney General. With a new gubernatorial administration comes opportunity for increased legislative movement. Select legislators could move into the administration, allowing for some committee shakeups.

In Delaware, all seats are up for re-election due to redistricting. Compass will keep a pulse on contentious races that could impact the composition of the leadership in the General Assembly. This is not an election year for Governor Carney, so we do anticipate general consistency in the make up of the Administration.

District of Columbia will also hold their General Election on November 8th. We expect to see a few new faces in the coming year. Compass is monitoring contentious At-Large race between Kenyan McDuffie and Elissa Silverman.

This election lends the Compass team an opportunity to facilitate working relationships from freshman delegates to Governors’ offices, while strengthening the relationships we currently hold.

We will hold a call on November 9th to deliver a live update from our government relations team about election results in Maryland, Delaware, and D.C.