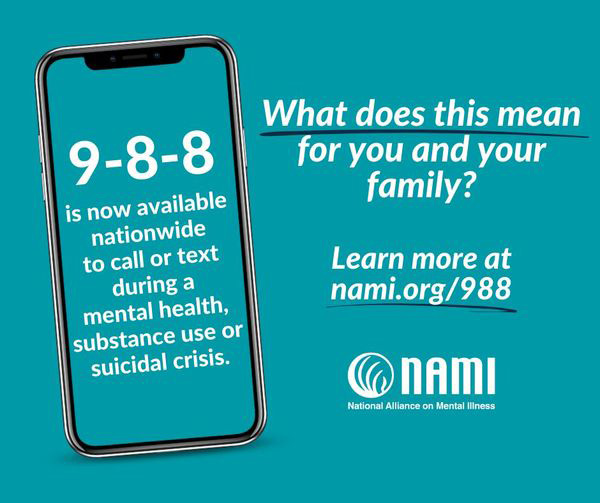 It’s here! 988 is officially available nationwide to call or text from anywhere in the country during a mental health crisis. You can learn more about what changes with 988 (and what doesn’t) here: nami.org/988

Our client, NAMI, has been fundamental in the creation of 988. We are so grateful for their continued advocacy for such important issues!

Mental health crises and suicides can be devastating for individuals, families, and communities. When someone experiences a mental health crisis and doesn’t receive the care they need, they can end up in emergency rooms, on the streets, involved in the criminal justice system, or in the worst case, they could lose their life. A ‘round the clock crisis hotline can be the first line of defense in preventing these tragedies and an essential part of any continuum of care for mental health crises. HB 293 designates 988 to be the phone number for Maryland’s suicide prevention and behavioral health crisis hotline and establishes a sustainable funding source to support existing behavioral health crisis call centers in Maryland.

This legislation was supported by a broad coalition of stakeholders. It passed and received supporting appropriations of $10 million to help launch the program. Sustainable funding will be the next hurdle to ensuring the success of 9-8-8 in future years.

Though this summer’s 2022 Primary election had some unpredictable twists and turns, the General Election winners are a bit more predictable if one is to believe the polling. Here is a quick recap of the State’s 3 state-wide elections:

In the Governor’s race on the Republican side, the ever-popular, Governor Hogan’s hand-picked successor, Commerce Secretary Kelly Schulz decidedly lost over Trump-backed, right-wing candidate Dan Cox. This shows that the primary voter in the Republican primaries tends more toward the right rather than the center. Governor Hogan has called Dan Cox a “QAnon whack job” and announced he would not be voting for him. It is widely accepted in political circles that this means the winner of the Democratic Primary, Wes Moore, is heavily favored in the General election. Moore, a combat Veteran and best-selling author, defeated Comptroller Peter Franchot and former DNC Chairman Tom Perez. Because Maryland is tied with California as one of the most democratic states in the country, and because the election of Cox leaves the Republican party divided, it certainly appears Wes Moore will be the next Governor of Maryland. Wes Moore has tapped former State Delegate Aruna Miller as his running mate for Lt. Governor while Dan Cox has tapped law professor Gordana Schifanelli to join him on his ticket.

A similar trend occurred on the Republican side of the Attorney General’s race. The party nominee is Michael Peroutka who ran on a hyper-conservative platform. He will face Congressman Anthony Brown in the General Election. Brown handily defeated Katie O’Malley in the primary who is a former Judge and First Lady of Maryland. Maryland has not elected a Republican Attorney General in 70 years.

Rising-star Delegate Brooke Lierman decidedly beat her Democratic Primary opponent Bowie Mayor Tim Adams. She will face Republican Harford County Executive Barry Glassman in the fall. Glassman, who has a reputation for working across the aisle, is looking to distance himself from the other state-wide candidates on the Republican side.

All in all, it looks like there will be about 40 new Senators and Delegates being sworn in for the General Assembly of 2023. The Democrats are expected to maintain super-majorities in both the House of Delegates and the State Senate. 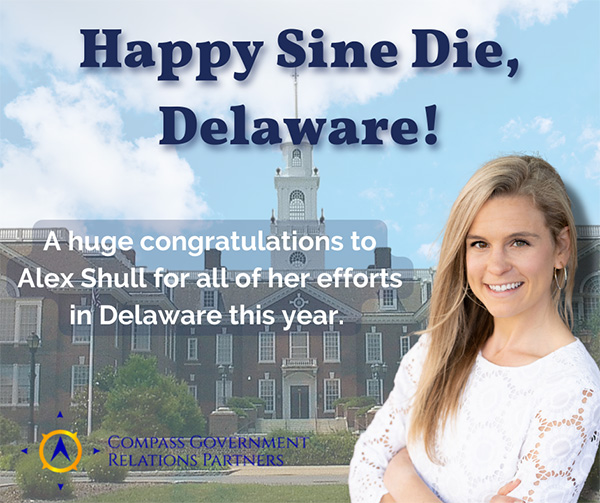 The 151st Delaware General Assembly has come to a close. Lawmakers adopted the state’s largest ever operating budget to the tune of $5.1 billion. The spending bill makes significant investments in public schools and includes pay raises for state employees. Governor Carney also signed a $378.6 million-dollar one-time appropriation that will fund paid family and medical leave and the Library Connection Program, among others.

Beyond passing the largest budget in state history, the legislature moved a few notable pieces of policy including the Healthy Delaware Families Act which provides Delawareans with paid family and medical leave, the Telehealth Access Preservation and Modernization Act which enhances access to telemedicine, and legislation that increased the net metering cap in Delaware. Marijuana legalization and a polystyrene ban were two marque bills that did not make it across the finish line this year but are like to return in 2023.

With the legislative session behind us, Legislators will now set their focus on the 2022 election cycle. Due to redistricting, all 62 Legislators are up for re-election. The state’s primary is scheduled for September 13th, just two months before the November 8th general.